Harley, His Vision and His Dream

We were all deeply saddened by the sudden tragic loss on November 14, 2009, of our company President and dear friend, John "Harley" Kellock. Harley was a wonderful person with a winning personality, a memorable smile, and a warm, kind, and thoughtful nature. Harley was a friend to many. Those of us fortunate to have met and to have known Harley will always cherish our memories of him. Harley had a passion for renewable energy. He was devoted to its development in his community and throughout Nova Scotia. Harley was dedicated to completing tasks related to it. He continuously demonstrated boundless energy in the pursuit of his dream of creating a community owned wind energy project for his Merigomish community. Harley was also involved in developing wind and renewable energy throughout Nova Scotia through his position on the Board of Scotian Windfields Inc. 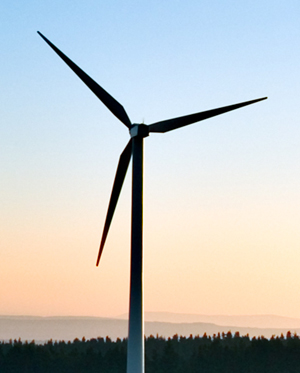 Harley's vision of what renewable energy developments could mean for us now and for future generations lives on in Northumberland Wind Field and across the renewable energy community in Nova Scotia. Following his passing, the Board of Directors of Northumberland Wind Field Inc. met on December 10th 2009, to share their grief and sense of profound loss. We quickly came to the realization and conclusion that to honour and respect what Harley had achieved during his time with us, we owed it to him to pool our skills and resources to move Northumberland forward.

During 2009, Harley had worked tirelessly to complete Northumberland's submission of an Offering document to the Nova Scotia Securities Commission for an Offering of Shares. Northumberland went on to have a successful Offering in 2011. With the capital raised from this Offering, the company was able to make steady progress during the year. In June, 2011, the company leased land on Doliber Mtn in Avondale, Pictou County, a location as close as possible to Harley's final resting place close by his home on the Shore Road.

In August of 2011, a meteorological (Met) tower was installed on Doliber to measure the wind resource at the site. Those gathered on August 29, 2011, dedicated the Met tower in Harley's memory. When Northumberland Wind Field's wind energy project is built on Doliber Mtn in Avondale in the not too distant future, Harley's dream of producing community-owned renewable energy in Pictou County will be achieved. The Avondale Wind Park was dedicated to Harley on September 8, 2012. The company will continue to grow and prosper in his memory with the continued support, trust, and confidence of its loyal shareholders, many of whom knew Harley as a friend.

In 2004, it became known that John "Harley" Kellock was interested in wind energy and its development. At the time, Harley was only 33 years old, but he saw the opportunity for developing renewable, sustainable wind energy for the future.

In September of 2004 NWF was formed as a community-owned Wind Field under the Community Economic Development Investment Fund program of the Department of Economic Development initiative (abbreviated to the "CEDIF initiative"). In 2006, NWF began raising a pool of capital through the sale of shares. A 2nd Offering was conducted in 2007. With Harley's hard work, dedication and effort, the company grew to 84 shareholders in a very short time.

Into the Future Without Harley

On November 14, 2009, Harley was lost in a tragic accident near his home. Northumberland Wind Field Inc lost a dear and valued friend, its President, leader and mentor; and a person widely respected, admired and valued as a friend. For those within Northumberland, it was an honour and privilege to have known and worked with Harley. With his loss came the question - What do we do now?

Where do we go from here? After a short discussion that took place during the first meeting without Harley on Devember 10, 2009, NWF's Board of Directors quickly determined that they had to continue to move the company forward to fulfill the shareholders' trust and to realize Harley's dream of a community-owned wind energy project in Pictou County. We immediately came to the realization that to honour and respect all that Harley had achieved, we owed it to him to pool our skills and resources to carry NWF forward into the future. Sharon Henderson was chosen by NWF's Board of Directors to be the acting president, Don Butler, its vice president and Tara Morin, secretary/treasurer until NWF's 2010 Annual General Meeting in the Fall of 2010. Other directors at the time were Mike Reddick, Bill Teague, Margaret Ann MacFarlane-Leil, and Phil Wyman. All continue to hold a Directorship on the Board except Don Butler and Tara Morin. Sharon Henderson completed the Offering document Harley had started. NWF went on to have its first successful Offering without Harley in 2011. Northumberland has continued to make steady progress towards achieving Harley's dream.