WHAT IS WIND ENERGY?

Wind energy is a converted form of solar energy. The sun's radiation heats different parts of the earth at different rates - most notably during the day and night, but also when different surfaces (for example, water and land) absorb or reflect heat at different rates. This causes portions of the atmosphere to warm differently. Hot air rises, reducing the atmospheric pressure at the earth's surface, and cooler air is drawn in to replace it. The result is wind.

Air has mass, and when it is in motion, it contains the energy of that motion - "kinetic energy." Some portion of that energy can be converted into other forms - mechanical force or electricity - that we can use to perform work.

WHAT IS A WIND TURBINE AND HOW DOES IT WORK?

A wind energy system transforms the kinetic energy of the wind into mechanical or electrical energy that can be harnessed for practical use. Mechanical energy is most commonly used for pumping water in rural or remote locations - the "farm windmill" still seen in many rural areas is a mechanical wind pumper - but it can also be used for many other purposes (grinding grain, sawing, pushing a sailboat, etc.). Wind electric turbines generate electricity for homes and businesses and for sale to utilities.

There are two basic designs of wind electric turbines: vertical-axis, or "egg-beater" style, and horizontal-axis (propeller-style) machines. Horizontal-axis wind turbines are most common today, constituting nearly all of the "utility-scale" (100 kilowatts, kW, capacity and larger) turbines in the global market.

WHAT ARE WIND TURBINES MADE OF?

The towers are mostly tubular and made of steel. The blades are made of fiberglass-reinforced polyester or wood-epoxy. The Enercon E53 wind turbines planned for Northumberland's Avondale Wind Park are 90% recyclable.

HOW BIG IS A WIND TURBINE?

Utility-scale wind turbines for land-based wind farms come in various sizes, with rotor diameters ranging from about 50 meters to about 90 meters, and with towers of roughly the same size. A 90-meter machine, definitely at the large end of the scale at with a 90-meter tower would have a total height from the tower base to the tip of the rotor of approximately 135 meters (442 feet).

Offshore turbine designs now under development will have larger rotors - at the moment, the largest has a 110-meter rotor diameter - because it is easier to transport large rotor blades by ship than over land. Wind turbines intended for residential or small business use are much smaller. Most have rotor diameters of 8 meters or less and would be mounted on towers of 40 meters in height or less.

HOW MANY TURBINES DOES IT TAKE TO MAKE ONE MEGAWATT (MW)?

kilowatt (kW, 1,000 watts), megawatt (MW, 1 million watts), 1000 kilowatts (kW) = a megawatt (MW). Most manufacturers of utility-scale turbines offer machines in the 700-kW to 1.8-MW range. Ten 700-kW units would make a 7-MW wind project, while 10 1.8-MW machines would make a 18-MW facility. In the future, machines of larger size will be available, although they will probably be installed offshore. Units larger than 4 MW in capacity are now under development.

HOW MANY HOMES CAN ONE MEGAWATT OF WIND SERVE?

An average household uses about 10,000 kilowatt-hours (kWh) of electricity each year. One megawatt of wind energy can generate between 2.4 million and 3 million kWh annually. Therefore, a megawatt of wind generates about as much electricity as 240 to 300 households use annually. It is important to note that since the wind does not blow all of the time, wind cannot be the only power source for that many households without some form of storage system. The "number of homes served" is just a convenient way to translate a quantity of electricity into a familiar term that people can understand. (Typically, storage is not needed, because wind generators are only part of the power plants on a utility system, and other fuel sources are used when the wind is not blowing.)

WHAT IS A WIND POWER PLANT?

The most economical application of wind electric turbines is in groups of large machines (660 kW and up), called "wind power plants" or "wind farms." For example, a 100 MW wind farm near the community of Pincher Creek, Alberta, consists of 145 turbines sited far apart on farmland. The wind farm generates electricity while agricultural use continues undisturbed.

Wind plants can range in size from a few megawatts to hundreds of megawatts in capacity. Wind power plants are "modular," which means they consist of small individual modules (the turbines) and can easily be made larger or smaller as needed. Turbines can be added as electricity demand grows. Today, a 50-MW wind farm can be completed in 18 months to two years. Most of that time is needed for measuring the wind and obtaining construction permits - the wind farm itself can be built in less than six months

WHAT IS "CAPACITY FACTOR"?

Capacity factor is one element in measuring the productivity of a wind turbine or any other power production facility. It compares the plant's actual production over a given period of time with the amount of power the plant would have produced if it had run at full capacity for the same amount of time.
• Capacity Factor = P/M
• P = Actual amount of power produced over time
• M = Power that would have been produced if turbine operated at maximum output 100% of the time

A conventional utility power plant uses fuel, so it will normally run much of the time unless it is idled by equipment problems or for maintenance. A capacity factor of 40% to 80% is typical for conventional plants.

A wind plant is "fueled" by the wind, which blows steadily at times and not at all at other times. Although modern utility-scale wind turbines typically operate 65% to 80% of the time, they often run at less than full capacity. Therefore, a capacity factor of 25% to 40% is common, although they may achieve higher capacity factors during windy weeks or months.

It is important to note that while capacity factor is almost entirely a matter of reliability for a fueled power plant, it is not for a wind plant - for a wind plant, it is a matter of economical turbine design. With a very large rotor and a very small generator, a wind turbine would run at full capacity whenever the wind blew and would have 60-80% capacity factor - but it would produce very little electricity. The most electricity per dollar of investment is gained by using a larger generator and accepting the fact that the capacity factor will be lower as a result. Wind turbines are fundamentally different from fueled power plants in this respect. If a wind turbine's capacity factor is 33%, doesn't that mean it is only running one-third of the time? No. A wind turbine at a typical location should run about 65-80% of the time. However, much of the time it will be generating at less than full capacity (see previous answer), making its capacity factor lower.

WHAT IS "AVAILABILITY FACTOR"?

Availability factor (or just "availability") is a measurement of the reliability of a wind turbine or other power plant. It refers to the percentage of time that a plant is ready to generate (that is, not out of service for maintenance or repairs). Modern wind turbines have an availability of more than 98%-higher than most other types of power plant. After two decades of constant engineering refinement, today's wind machines are highly reliable.

HOW MUCH ELECTRICITY CAN ONE WIND TURBINE GENERATE?

The ability to generate electricity is measured in watts. Watts are very small units, so the terms kilowatt (kW, 1,000 watts), megawatt (MW, 1 million watts), and gigawatt (pronounced "gig-a-watt," GW, 1 billion watts) are most commonly used to describe the capacity of generating units like wind turbines or other power plants.

The output of a wind turbine depends on the turbine's size and the wind's speed through the rotor. Wind turbines being manufactured now have power ratings ranging from 250 watts to 1.8 megawatts (MW). Example: A 10-kW wind turbine can generate about 10,000 kWh annually at a site with wind speeds averaging 12 miles per hour, or about enough to power a typical household. A 1.8-MW turbine can produce more than 5.2 million kWh in a year - enough to power more than 500 households. The average U.S. household consumes about 10,000 kWh of electricity each year. » top of page?

You occasionally observe some of the turbines in a windfarm not turning while most are operating. There are a number of possible reasons for this:

1. The wind is not always the same across all parts of a windfarm. In light winds, some turbines may not be sensing sufficient wind to start operation (about 7 mph).
2. The turbine may be out of service for maintenance. While the wind turbines operated and maintained by enXco are available to generate energy over 98% of the time, like all machinery, wind turbines require maintenance to function properly.
3. The utility may request that the windfarm reduce energy production for short periods of time. This is accomplished by shutting down some of the wind turbines.

There are a number of reasons this may happen.

1) The wind farm may be producing more energy than the electric system can hold at that point, so the operators have to reduce the output and in turn they turn off the wind turbines.
2) Wind turbines cause effects on each other, and in high winds, this can put stress on the turbines. So sometimes they alternate one on one off down a row of turbines if they are built close together. 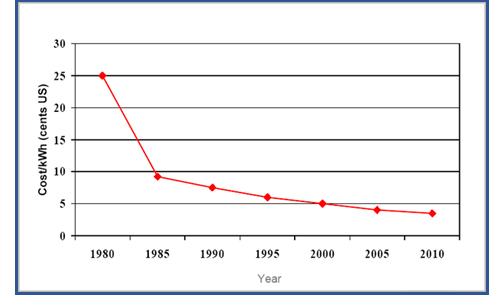 Wind generated electric energy - The cost to produce electricity from wind is getting affordable. 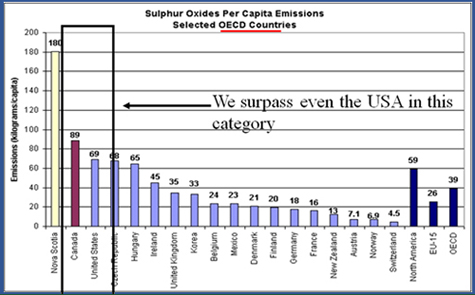